Another biogas plant from BTA International has been completed and accepted by the Austrian town Zell am See. The facility will make a significant contribution to achieving the climate targets of the region by producing regenerative energy out of organic residues and sewage sludge.

With a yearly energy yield of 14 GWh, Biogas ZEMKA GmbH (the company running the plant), it not only covers its own energy demands but furthermore supplies other consumers with high quality biogas and heat. The largest consumer is the newly opened wellness spa “Tauern Spa”.

Situated at the edge of the national park Hohe Tauern, at an altitude of about 800 m, BTA International GmbH together with the Austrian company Machowetz & Partner Baumanagement GmbH has built and completed for Biogas ZEMKA GmbH in Zell am See one of the most modern biogas plants for energetic valorization of biogenic residues. This facility is characterized by high substrate flexibility and intelligent biogas valorization. Up to 18 000 tons per year of organic residues can be treated, including waste streams which due to their high water content could not be processed in the present composting plant. The bulk of the substrate input comes from regional biogenic residues from door-to-door collection; in addition the facility receives kitchen and food waste, sewage sludge, residues from fat separators, and other liquid residues.

Machowetz & Partner was responsible for the civil construction and the electro technical installations as well as the excess water treatment. BTA was responsible for the design, build, and start-up of waste reception and pre-treatment process, anaerobic digestion, biogas treatment, solid-liquid separation, and process water management. BTA also supplied the mechanical equipment for these processes as well as the control unit for the overall plant.

The goal is the climate-friendly production of heat and energy for the region. In the plant concept, Biogas ZEMKA took into account coverage of its own heat demand and two further valorization paths. A large part of the produced biogas is directly transported in an underground gas pipe over more than 2 km to the “Tauern Spa”, where the biogas is converted in a boiler to heat for the spa and sauna. The remaining biogas is upgraded to natural gas quality by Salzburg AG in a demonstration plant.

“The facility in Zell am See will serve as a model, because of its broad range of input streams and its well -planned use of produced biogas”, noted Eike Liekweg, Managing Director of BTA and COO of the mother company Agraferm Technologies AG, on the completion of the plant. “The upgrade to natural gas and the long transport of the biogas to the Tauern Spa create demanding requirements for desulfurization, gas cooling, and the condensate removal unit”. 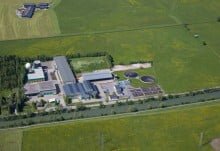