About biogas and biomethane

Europe is the largest producer of biogas today. Biogas production is a microbiological fermentation process in which complex molecules of organic matter are broken down into simpler molecules such as alcohol, carbon dioxide, and methane under the absence of oxygen. This natural process, also called anaerobic digestion, is used in a variety of applications, such as the fermentation of bread or the brewing of beer. The result of this process is a renewable gas which can provide heat and power and fuel our vehicles while protecting the environment and boosting rural development.

Biogas is produced mainly from organic residues and it consists of 45 – 85 vol% methane (CH4) and 25 – 50 vol% carbon dioxide (CO2). As other renewable energy sources, biogas can contribute to the reduction of GHG emissions from different sectors. It can be used for electricity and heat production, as transport fuel or as raw material for further applications. The competitive advantage of biogas compared to other renewable sources is that it takes advantage of the existing infrastructure and it can be stored, providing an alternative to intermittent generations from other sources, such as solar and wind, and ensuring security of supply.

Combined heat and power engines (CHP) are a common valorisation route for biogas in Europe. The idea behind CHP is that the co-generation of electrical and thermal energy is more efficient than generating them separately. Depending on the design of the biogas plants, part of the heat from the CHP is used for the fermentation process. For example, the biogas reactors have a heat demand to stay the right temperature. The produced electricity is mainly injected in the electricity grid whereas the leftover heat production is available for nearby heating applications.

Biomethane is a purified form of raw biogas from anaerobic digestion that can be used as a natural gas substitute. CO2, H2O, H2S and other impurities are removed during biomethane production, leaving a high-caloric and pure gas. It can be used for all natural gas end-user applications (heating and cooling, power, transport, etc.). In the case of the transport sector, it is used as a biofuel in the form of a CNG or LNG substitute, called bio-CNG or bio-LNG. Biomethane in transport is highly performant when it comes to the reduction of GHG emissions if we consider the full carbon footprint of the vehicles (Well-to-Wheel). Biomethane can be liquefied for example in heavy-duty transport and marine, which are difficult sectors to electrify.

An ally of the circular economy

Biogas is produced mainly from organic residues. These can be energy crops, plant by-products, animal by-products, biowaste from households or industrial & commercial organic waste. Additionally, it can be extracted from wastewater streams or landfills.

Digestate is the remaining part of the degraded biomass after biogas production: it is stable organic matter rich in various nutrients (N, P, K). Depending on the feedstock used for biogas production, digestate can be directly usable as organic fertiliser in the same way raw animal slurries are spread on fields in agriculture. It can also be further upgraded to recover high quality mineral nutrients. Digestate use as organic fertiliser displays multiple advantages: it allows reuse of nutrients and substitutes mineral fertiliser of fossil origin. Compared to raw manure, digestate is also sanitised thanks to the biogas production process neutralising most of the pathogens of the original feedstock such as bacteria and crop diseases. Digestate homogeneity and density also allow for faster penetration in the soil compared to raw manure, making nutrients more easily accessible to plants in the soil. If unfit for agricultural purposes, digestate can be further processed and used as a raw material for industrial processes.

After purification of biogas to biomethane, carbon dioxide is left as a side-product. The carbon dioxide stream can be valorised in food industry or can be used to maximize photosynthesis potential in greenhouses.

A driver of rural development

The recovery of organic residues, carbon and digestate, combined with other options such as the use of secondary crops for biomethane production, can contribute to the development of a more efficient farming sector, which is the main economic activity of many rural areas.

Anaerobic Digestion (AD)
Is a biological process in which microorganisms break down biodegradable material in the absence of oxygen creating two important products: biogas and digestate. AD makes the best use of organic materials by producing biogas for the generation of renewable heat, electricity, fuel and fertilizer while closing the nutrients cycle and reducing greenhouse gas emissions.

Thermal gasification (Gasification)
Is a physico-chemical oxygen depleted process in which the carbon containing components of the biomass break down to syngas instead of being completely combusted. It is a complementary technology to anaerobic digestion and greatly amplifies the potential of renewable energy in the form of heat, electricity and vehicle fuel.

Feedstock
AD can process almost any biogenic material including solid and liquid manure, energy crops, catch crops, agricultural waste and residues, industrial food and beverage waste, sewage sludge and the organic fraction of municipal solid waste. Gasification can theoretically process any carbon containing material and is a complementary technology to Anaerobic Digestion (AD), since it can treat high-solids feedstock with low anaerobic biodegradability; these include lignocellulosic feedstocks such as wood chips, and non-recyclable waste fractions of biomass origin currently landfilled or incinerated for energy recovery.

Biogas
The primary product of AD is a methane-rich renewable gas composed of 45 – 85 vol% methane and 25 – 50 vol% carbon dioxide.

Digestate
Remaining part of organic matter treated by AD, rich in nutrients and nitrogen, commonly used as an organic fertilizer in agriculture.

Syngas
The primary product of gasification is a mixture of carbon monoxide and hydrogen, with traces of methane and carbon dioxide. It may be used directly for electricity generation, or further transformed to increase its share of methane.

Biomethane
When carbon dioxide and trace gases in biogas are removed, a methane rich renewable natural gas substitute is left in the form of biomethane. Biomethane can be injected into the gas grid, used as a vehicle fuel or used for combined heat and electricity generation.

Biogas in your local community 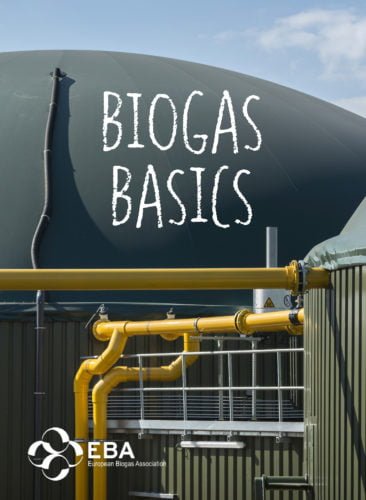