Biomethane production potentials in the EU 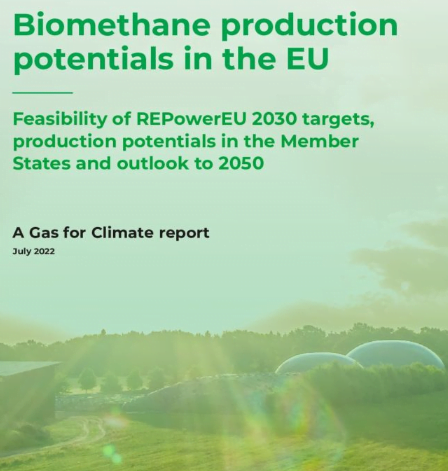 Biomethane can play an important role in meeting the European Union (EU) 2030 GHG reduction target and achieving net-zero emissions by 2050. Additionally, biomethane increases European energy security by reducing the dependency on Russian natural gas and can alleviate part of the energy cost pressure on households and companies. The European Commission fully recognises these benefits and thus set a target of 35 billion cubic meters (bcm) of annual biomethane production by 2030 in its recent REPowerEU plan.

Today, 3 bcm of biomethane and 15 bcm of biogas are produced in the EU-27. Gas for Climate previously estimated the sustainable supply potential of biomethane in the EU-27 and UK at 35 bcm in 2030 and 95 bcm by 2050. Building on the renewed ambition by the EU to accelerate biomethane production and the advancements in technology, Gas for Climate has updated the production potentials to reflect these recent developments.

In this paper, Gas for Climate applies a unified methodology to identify both the short- and long-term potential of biomethane production in each EU Member State (plus Norway, Switzerland and the UK), based on sustainable feedstocks.