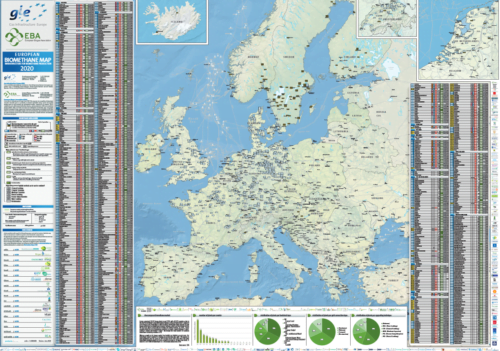 The European Biogas Association (EBA) and Gas Infrastructure Europe (GIE) have released the second edition of the ‘European Biomethane Map’. The analysis of the data collected shows that the number of biomethane plants in Europe has increased by 51% in 2 years, from 483 in 2018 to 729 in 2020. There are currently 18 countries producing biomethane in Europe. Germany has the highest share of biomethane plants (232), followed by France (131) and the UK (80).

This is the second edition of the map. It has been made in cooperation between two organisations promoting the development of renewable gases: the European Biogas Association (EBA) and Gas Infrastructure Europe (GIE). The first edition of the map was launched in spring 2018. This comprehensive map locates and lists all known biomethane installations running in Europe. It has been produced with the information gathered from national biogas associations, energy agencies and companies.