Two EBA experts have attended a workshop organized by IEA Bioenergy Task 33, Vienna University of Technology and MCI Innsbruck. The workshop took place on the 3rd May 2017 in Innsbruck, Austria, and was followed by a site visit to SynCraft and GE Jenbacher on the next day.

The first session of the workshop was dedicated to “Small scale gasification for CHP – experience reports”, and the second to “Byproducts from thermal gasification”.

On the beginning of the 1st session an overview on small scale gasification in Germany, Austria and Switzerland was given by the Fördergesellschaft Erneuerbare Energien e.V. (FEE), followed by an experience report given by Urbas. There were also innovative technologies presented during the workshop such as entrained flow gasification by MEVA, WoodRollR by Cortus Energy, staged gasification by Ronda Engineering and early commercialization plant by CMD Engine. An interesting presentation on utilization of special gases was given by a representative of GE Jenbacher.

The workshop with 56 participants from 11 countries was very well attended and built a platform for information exchange, which is one of the aims of the Task 33. All presentations can be found at the IEA Bioenergy Task 33 website.

The site visits to SynCraft in Innsbruck and GE Jenbacher in Jenbach took place on the 4th May 2017. SynCraft is a supplier of turn-key wood power plants based on floating bed gasification, founded in 2009. In the following figure the technology of SynCraft gasifier can be seen. 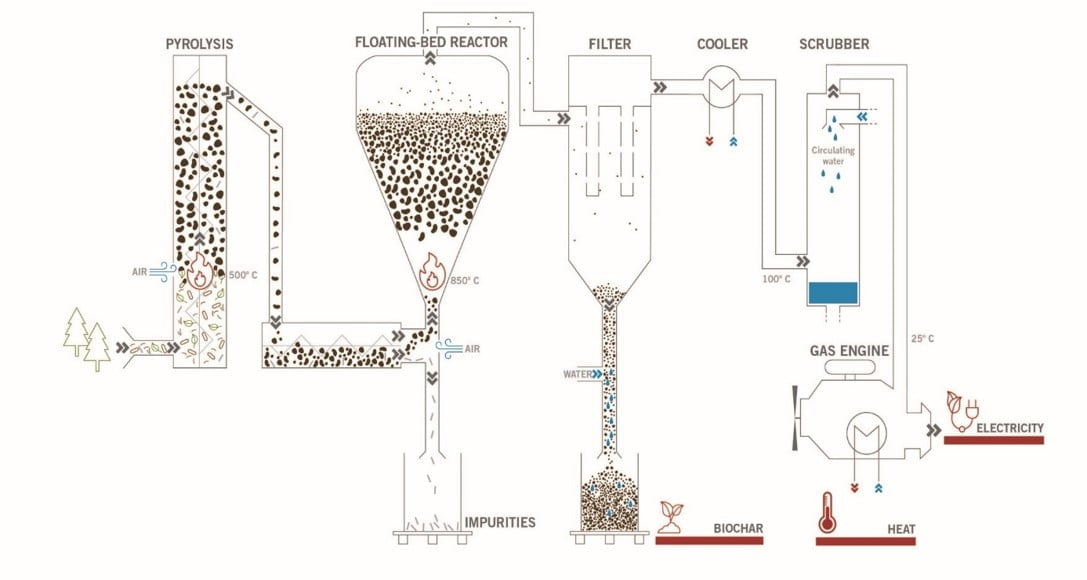 GE Jenbacher manufactures gas engines and cogeneration modules. It is part of their Distributed Energy portfolio of products and is one of their gas engine technologies. Jenbacher emerged from the former Jenbacher Werke, which was founded in 1959 and manufactured gas and diesel engines, and locomotives. The company was bought out by General Electric in 2003 and was renamed GE Jenbacher GmbH & Co. During the excursion tour it was possible to visit the production halls and have a look to a production of GE Jenbacher engines.

EBA is looking forward in the near future to expand its activities to different technologies for renewable methane production in Europe, such as bio-SNG (Synthetic Natural Gas) from biomass gasification.