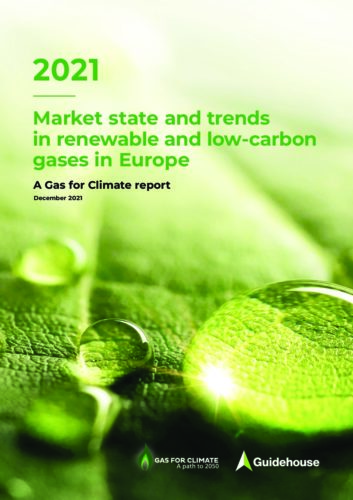 The report Market state and trends in renewable and low-carbon gases in Europe, published by the Gas for Climate consortium, identifies the most recent key trends across the value chain of biomethane and green and blue hydrogen. The report, developed by Guidehouse, focuses on indicators and project examples by collecting and combining statistical information and showcasing the latest projects.

The biomethane sector is growing, with an annual production increase of 17%, reaching 32 TWh in 2020. Bio-LNG production is expected to increase eightfold to 9.5 TWh by 2023. Reverse flow facilities are being put in place to allow bidirectional flow between the gas distribution and transmission grid, enabling the increase of produced biomethane to be injected into the grid. Biomethane is replacing natural gas in hard-to-abate sectors. Industry is seeking to tap into the 310 Mt/year biogenic CO2 potential to achieve negative emissions. Biogenic CO2 (captured from biomethane production) is being used in the industry sector as a feedstock to replace fossil-based CO2.

The green hydrogen project pipeline is skyrocketing with more than 50 GW of green hydrogen capacity planned to be in operation by 2030. To keep up, electrolyser manufacturing plants, or “gigafactories”, have been announced totaling over 20 GW/year by 2025 – of which almost 90% are located in Europe. Dedicated hydrogen transport and storage infrastructure is to be deployed as Important Projects of Common European Interest (IPCEIs) in coming years. Large increase in hydrogen demand is expected in Europe. Emerging demand in e-fuels, due to an EU mandate, can possibly lead to around 90 TWh/year of hydrogen demand by 2030. In addition, many steelmakers have announced plans to switch to hydrogen-based steel making. Announced plans alone add up to 30% of current primary steel capacity in the EU by 2030, which would lead to around 80 TWh/year of hydrogen demand by 2030, signalling a key trend.

All these developments provide a start to achieve the EU 2030 decarbonisation target and show that industry is ready to scale up biomethane and hydrogen. However, a political commitment to the role of gas infrastructure and renewable and low-carbon gases in meeting EU climate goals is needed now. Otherwise, we risk missing the 2030 goals.