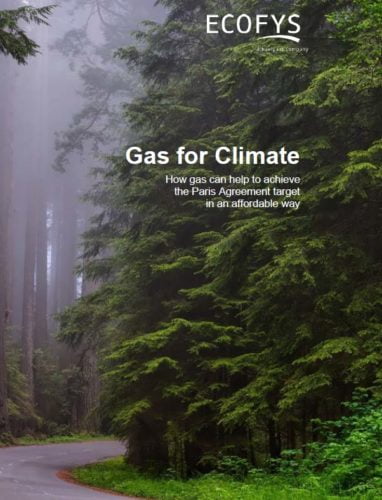 This study has been commissioned by Gas for Climate, a consortium of seven gas transport companies (Enagás, Fluxys, Gasunie, GRTgaz, Open Grid Europe, Snam and TIGF) based in six EU Member States plus two renewable gas producing organisations (European Biogas Association and Consorzio Italiano Biogas). The group shares the vision that renewable and low carbon gas, transported, stored and distributed by the existing gas infrastructure, can help to achieve a net zero carbon European energy system by 2050 in a cost-effective way.

This study starts from the perspective that all gas consumption in Europe must, by 2050, be net zero carbon. This means that it is produced from renewable sources and that any remaining natural gas consumption will be combined with carbon capture and storage or capture and permanent utilisation.1 Ecofys analyses how much renewable gasEurope can produce and what the societal value is of using this gas in existing gas infrastructure in various sectors of the economy. Based on conservative assumptions, we conclude that it is possible to greatly increase the production and use of renewable gas in the EU. Keeping the existing gas infrastructure in place to enable the transport, storage and distribution of this renewable gas significantly lowers the total EU energy system costs.