Scaling up renewable gas production in Europe will create at least 600,000 direct jobs by 2050 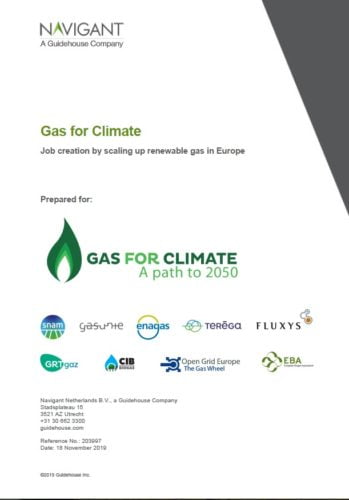 A new Gas for Climate analysis prepared by Navigant, a Guidehouse company, shows that scaling up renewable gases in the EU can create 1.7 million to 2.4 million jobs by 2050, of which 600,000 to 850,000 would be direct jobs. Full decarbonisation of the EU gas sector is expected to be an important contribution to the goals of the EU Green Deal and the upcoming decarbonisation package.

Renewable and low-carbon gases, combined with large quantities of renewable electricity, are essential to achieving a climate-neutral EU energy system. Production of renewable gases and low-carbon gases is already creating jobs today. According to the analysis, this renewable energy system will have significant benefits in creating employment opportunities, especially in rural areas where employment opportunities are often scarce. High-skilled technical jobs are expected to emerge in sectors related to manufacturing, installation, and the operation of biomethane and green hydrogen plants, as well as in the renewable electricity generation sector to produce hydrogen.

The report “Job creation by scaling up renewable gas in Europe” follows the Gas for Climate study published in March. This study showed that fully decarbonising Europe at lowest costs requires 2,900 TWh of biomethane and green hydrogen. The study also showed that using this gas in existing gas infrastructure could lead to nearly €217 billion in annual societal cost savings compared to achieving climate neutrality without a role for gas.