The project stood as winner of the First EBA Poster Award, received by Ms Lucy Culleton from the United Kingdom. Thanks to the great reception of this edition, it was decided that future awards will be celebrated parallel to the Conference of the European Biogas Association.

The recent project, funded by the European Metrology Research program for Innovation and Research (EMPIR) has taken steps towards providing a solution to one of biggest measurement challenges in biogas quality. There are currently no standardised methods for the measurement of siloxanes in biogas or biomethane, so scientific research projects such as this are proving vitally important for demonstrating the benefits of traceable online measurements of siloxanes in industrial biogas.

Siloxanes are a relatively new impurity found in biogas, as their use within household products has gradually increased over the last few decades. They are now commonly added to products such as cleaning agents, deodorants and cosmetics to improve their consistency and performance. These products are now typically used for biogas production. Due to their volatility, the siloxanes become entrained with the biogas during the digestion stage, and must be removed to below a threshold level before the biogas can be safely used to produce energy. This ‘total silicon’ limit level varies by application, and the limit values themselves are still under scrutiny at European standardisation level.

UK based company Protea has developed an instrument that utilises Fourier Transform Infra-Red (FTIR) detection to identify and quantify siloxanes in real-time. The full spectrum technique utilised by their ‘AtmosFIR’ instrument also allows for the measurement of methane and carbon dioxide. Although siloxanes appear similar to the detector, there are small changes in response due to differences between the molecules. This enables each siloxane to leave a unique fingerprint, and allows for multiple biogas components to be measured simultaneously, providing a holistic measurement solution. 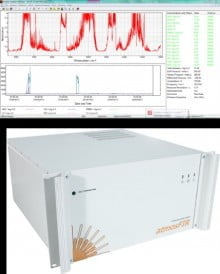 The AtmosFIR instrument was taken to a UK based wastewater treatment plant. The plant uses anaerobic digestion to convert waste sludge into biogas. Raw biogas from the digester is upgraded using a series of activated carbon beds before it is fed to gas turbines. The beds undergo a nine-hour regeneration cycle, in which a bed is taken off line after six hours for cleaning. The biogas flow is diverted onto a clean bed whilst the previous bed regenerates to ensure there is no interruption to the process.

Real time data collected from Protea’s instrument clearly captures how this regeneration cycle affects the amount fractions of individual siloxanes within the biogas. The real-time data also captured a surprising result when it was switched to measure raw biogas. Although some of the heavier siloxanes were seen to increase as expected, the total silicon was lower overall in the raw biogas. NPL and Protea chemists have theorised that this is likely due to the chemistry of the carbon beds and a feature of aging material. After contacting the site, it was discovered that the carbon beds were indeed due for replacement, which served to explain the anomalous result and highlight the advantage that continuous monitoring would provide.

Impurities such as siloxanes currently have no standardised methods for their quantification, so it is important to develop new solutions to feed into future standardisation. The development and validation of on line instruments such as Protea’s AtmosFIR are taking important steps in moving the biogas quality framework forward.

This project has demonstrated that techniques such as FTIR provide a viable solution to the siloxane measurement challenge, revealing hidden trends that would have otherwise gone unnoticed and providing plant operators with quality assurance and a platform for process optimisation.