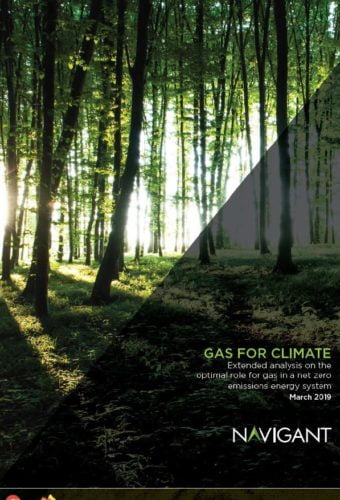 The purpose of this study is to assess the most cost-optimal way to fully decarbonise the EU energy system by 2050 and to explore the role and value of renewable and low-carbon gas used in existing gas infrastructure. This is being done by comparing a “minimal gas” scenario with an “optimised gas” scenario. This study is an updated version of the February 2018 Gas for Climate study, with an extended scope of analysis.

The current study adds an analysis of EU energy demand in the industry and transport sectors. It also includes an updated supply and cost analysis for biomethane and green hydrogen, including dedicated renewable electricity production to produce hydrogen, and an analysis on power to methane. Finally, we assessed the potential role of blue hydrogen, natural gas combined with carbon capture and storage (CCS) or carbon capture and utilisation (CCU).